skip to main | skip to sidebar

Bloopers for Man in the Box - It's My Birthday!

Behind the Scenes of An Honest R&B Song

"Ooh, Girl!" - An Honest R&B Song is blowing up. The raw sexuality Mike Polk displays in the video rivals that of Horace Brown's 1994 "Taste Your Love"... Except that Mike openly admits he's bad at sex. Here are some pics from that shoot. 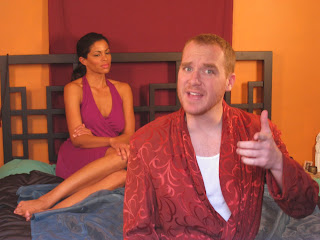 Mike sings to camera as his lady friend sits back on the bed, unsatisfied. All too familiar. 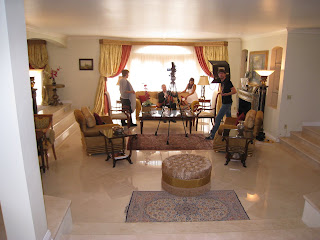 The house we shot in was huge, providing all sorts of places for Mike and his girlfriend to have awkward, elbow-y sex. 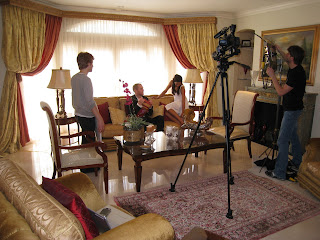 Matt and Brian were on set to help with the shoot, as always. 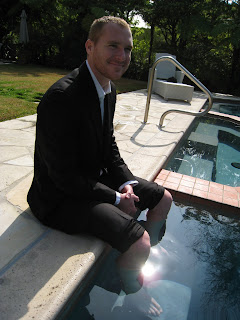 Mike taking a time out to test the waters. Is it me or does he look six years old here to anybody else? 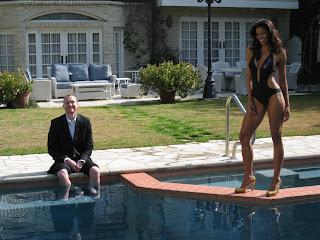 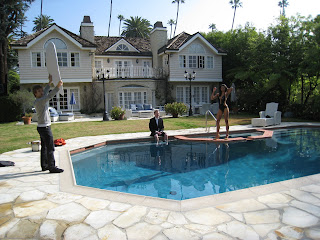 Matt is either shedding some light on our actors, or is about to do some serious kickboarding action. 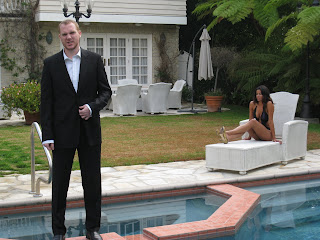 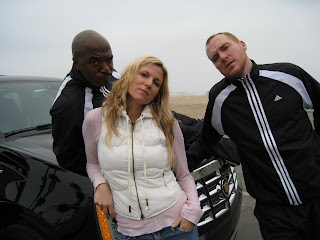 Jaime helped direct and produce the video. She jumped in to get a pic with the big, black, beautiful... Escalade. 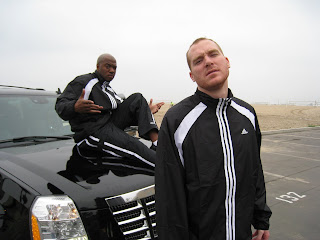 Matching Adidas track suits are all the rage on the L.A player scene these days, FYI. 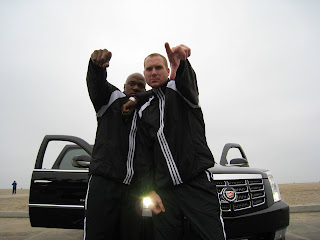 Fucking epic. This is an album cover if I ever saw one.

Leave comments and feel free to describe your most embarrassing sexual encounter! Don't all go at once, we might flood the boards with this one.
Posted by Paul at 10:51 AM 6 comments:

Wow, Runaway Box is racking up quite the list of nominations. It's like Titanic in '97. Or was it '98? Oh, that's right, it won Best Picture two years in a row because that's how ridiculously obsessed we all got with that movie. And now, ten years later, I think we all feel a little ashamed that we got so caught up in a sinking boat (aka Kate Winslet).

Here's how to make up for that: Go vote for Elevator - Music for best comedy series on YouTube. We've brought you a lot of laughs, it's the least you can do for us.

Don't forget to vote for Spanish Mike at the Yahoo! Video Awards as well. Do it right now, before all is lost!
Posted by Paul at 10:46 AM 1 comment:

Big news. Mike Polk's "One Semester of Spanish Love Song" has been nominated for a Yahoo! Video Award in the category of "Best Comedy Video". We think that's pretty darn sweet.

But here's the thing... In order to win, we have to get the most votes. I know, we should just win automatically, that's what I said. So turns out we need you guys to do your part, and vote for Mike! That is, if you think it's the best video. But somehow I doubt the dog puppet who says five words every thirty seconds is a worthy competitor. That's right, I'm trash talkin' the Yahoo! Video Awards! Get over it!

Mike has promised that if he wins, his acceptance speech will rival that of Sir Daniel Day Lewis' at this year's Oscars. I would personally love to see that.

Thanks for the votes!
Posted by Paul at 11:54 AM No comments:

Behind the Scenes of Elevator - Strip Club!

These are from the shoot for today's episode of Elevator - Strip Club! Check it out here. 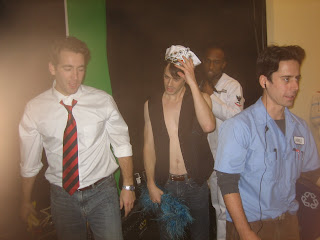 Here is the cast of this episode getting ready to enter the 'Vator. That's sheer determination on their faces. 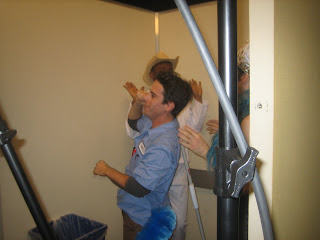 Things tend to get a little rowdy in there. Not because of the flamboyant homosexuals, but because of Ben Pace. 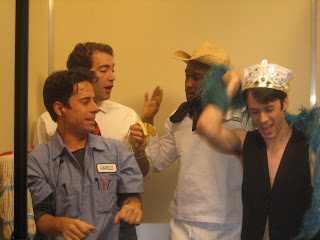 This was filmed the same day as the episode 'A Friendly Wager'. As ridiculous as these two look, Woody was in a dress and a tiara carrying a pink purse. He wins. 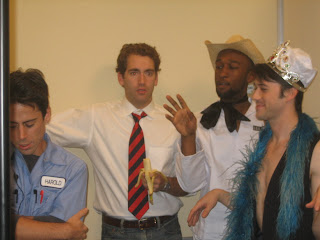 The banana was a last minute detail we decided to throw in. We thought it would be ironic if Chris was munching something phallic while unwittingly planning a trip to a gay strip club. 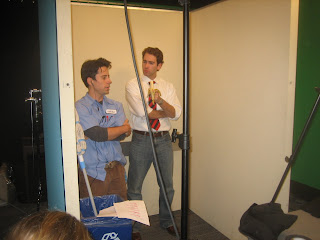 Yes, it's just a set! Any time somebody has to get in or out of the elevator, they have to step around that black metal pole that holds a light. 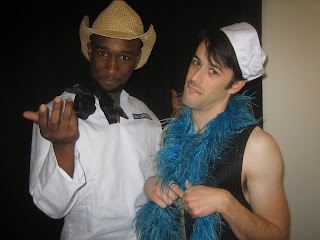 What a beautiful couple... Couple of what, I don't know.

There Will Be Miscellaneous Pictures

So I found some of these pictures lying around and figured I might as well put them to use and post them on the blog for y'all to look at. I guess I shouldn't say "lying around" (or y'all) since they only exist digitally and are therefore fundamentally incapable of "lying around". I didn't like, find them in some dusty bin or something. They were on my desktop. But I digress. Enjoy! 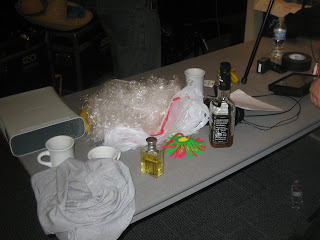 A table of props used during an Elevator shoot. Seems to be a fake beard, a bottle of alcohol, several coffee mugs, a bottle of cologne, a rubber stretchy toy thingy... Yes, it all adds up. 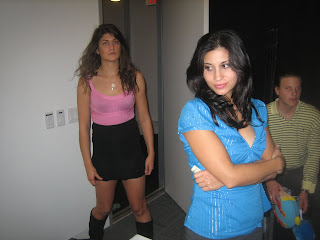 The ladies. And some dude. 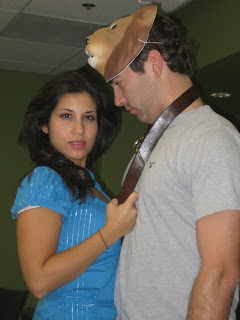 How sexy is this on a scale from 1 to 10. Leave it in the comments! 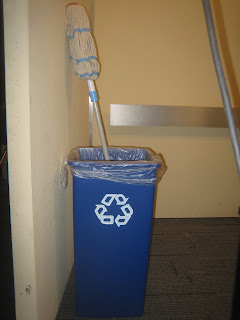 Elevator's most recognizable props. Also typically the carrier of many other props. 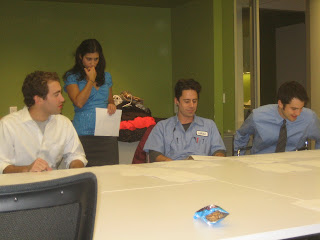 Table read. Look at all the scripts!

Can any other song besides "I Believe I Can Fly" accompany this picture? Answer: Probably, but I don't care to hear them because in my head this is too perfect. 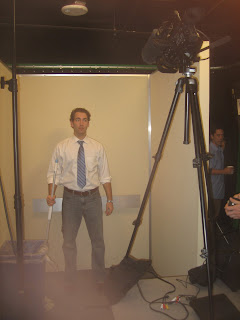 Woody stands alone in his elevator set. That's about as interesting a caption this pic deserves. No wonder it was just lying around.

Hope you enjoyed the rejects of past behind the scenes! I know I did!

Behind the Scenes with Jason Earles from Hannah Montana

I think one of the biggest secrets of our time is that everybody watches Disney. Everybody. If you deny this, you're lying to yourself. You watch Disney. You're a Hannah Montana fan. That's why you'll love this behind the scenes feature with Jason Earles in the Elevator.